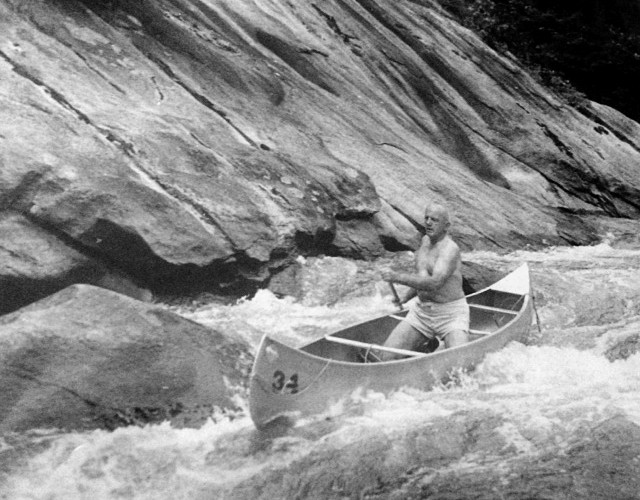 Many of us have summer camp memories of swimming in ponds, playing kickball or creating arts and crafts, but boys’ Camp Mondamin founder “Chief” Frank Bell Sr. wanted his charges to get a more significant experience out of their summer. In 1923, the year after he founded his camp in western North Carolina, Chief decided to take a group of boys paddling all the way to the Mississippi River. They started on Mud Creek near the camp and soon reached the class-IV rapids found in section nine of the French Broad River. Deciding to go for it, Chief and his young charge successfully made their way to the other side of the rapid, only to destroy the canoe in an eddy on the other side that now bears the name “Frank Bell’s Rapid.” The team secured another canoe, and they reached the Mississippi a month later. He was also the first paddler down several whitewater rivers in the southern Appalachians, proving to others that they were indeed navigable and survivable.

In 1945, Chief and his wife, Calla, founded Camp Green Cove for girls, and he continued to work at Mondamin until 1972 as camp director. In the intervening years, the pair took campers on trips including up the 17,800-foot Popocatepetl in Mexico and the redwood forests of northern California. They influenced more than four generations of campers. Chief died in October 1993.