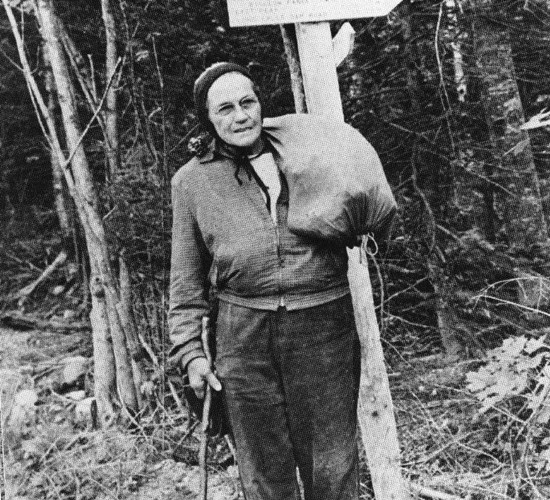 Many people turn to nature as refuge, and it apparently hit the spot for “Grandma” Emma Rowena Gatewood, the first woman to hike the entire Appalachian Trail solo. In May 1955 at the age of 67, the mother of 11, grandmother of 23 and survivor of more than 30 years of life-threatening domestic violence set out equipped with a blanket, a plastic shower curtain, a pair of Keds, a denim knapsack and not much else. However, she found she really didn’t need much. Relying on provisions found in the wild, the generosity of strangers and her own resilience, she trudged through more than 2,000 miles and six pairs of sneakers before completing her first thru-hike that September. She returned to hike the Trail a second time in 1957, the first person ever to do so, and completed a third hike in sections across 1964, again becoming the first to complete three full passes of the noteworthy footpath. Between her second and third hikes, she also hiked more than 2,000 miles from Missouri to Oregon as part of Oregon’s Centennial celebration.

Her great-great nephew, Ben Montgomery, published the New York Times bestseller “Grandma Gatewood’s Walk: The Inspiring Story of the Woman Who Saved the Appalachian Trail” in 2014 to bring her story to a new generation. The attention she drew from the media during her hikes served as excellent publicity for the AT in the late 1950s and early 1960s, and many credit her with reviving enough interest in the trail to save it from falling into ruin. She has also been the subject of a documentary, “Trail Magic,” as well as a storytelling program, a play and an e-book. Gatewood passed away in 1973.