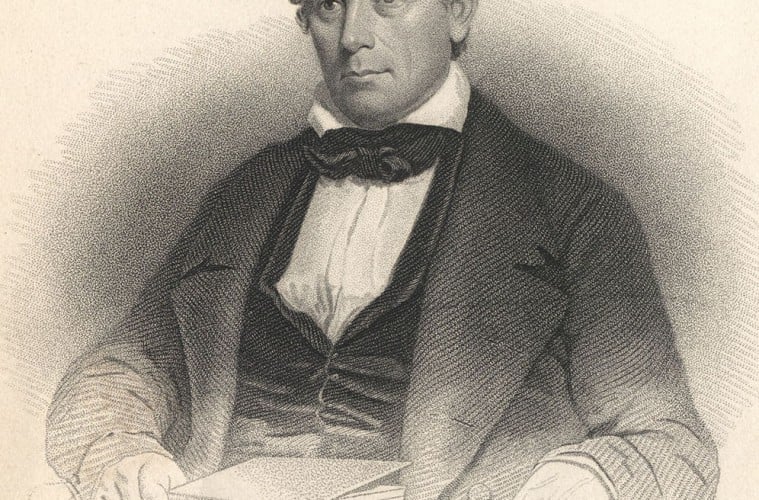 Even if you’re unfamiliar with its namesake, you’ve probably heard of Mount Mitchell, the tallest peak east of the Mississippi River. Elisha Mitchell conducted a number of geographical surveys during the first half of the 19th century to determine its height and confirm its pinnacle status, and he ultimately lost his life on the mountain defending his claim.

A college professor, geologist and Presbyterian minister, Mitchell taught at the University of North Carolina at Chapel Hill and held a number of upper-level positions in its administration during his career. He first visited North Carolina’s Black Mountain range during a North Carolina Geologic Survey in 1825, and he noted his opinion that the range reached higher than nearby Grandfather Mountain, then believed to be the tallest in the region. Mitchell completed his initial geographical survey of the state in 1828, then returned to the Black Mountains in 1835, 1838 and 1844 to confirm his measurements. These surveys required him to hike up and down dozens of miles from mountain peak to mountain peak, often crawling through miles of dense mountain laurel, gaining and losing several thousand feet of elevation over two or three days of data collection.

Although his measurements with different instruments varied slightly with each new expedition, they consistently measured the mountain hundreds of feet taller than New Hampshire’s Mount Washington, thought to be the tallest mountain east of the Rockies. He asserted his observation that the Black Mountain peak now known as Mount Mitchell actually held that distinction, but in 1855, U.S. Congressman Thomas Clingman challenged his claim. Clingman argued that Mitchell had been measuring a different peak and took credit for the discovery of the tallest one for himself. Aiming to clear up the uncertainty, Mitchell returned in 1856 and 1857 to retrace his steps and confirm his earlier discovery, but on a return hike from the peak in June 1857, he slipped at the top of a waterfall, hit his head and drowned after falling to the pool below. After an initial burial in Asheville, his remains were reinterred near the peak of the disputed mountain that now bears his name.

In 1881-1882, the U.S. Geological Survey confirmed Mitchell’s measurements and set the official height of the mountain at 6,684 feet, nearly 300 feet off of Clingman’s claim. The USGS also named the peak Mount Mitchell, officially dedicating the mountain with the name locals had used for years.

In 1915, the North Carolina legislature approved legislation to establish Mount Mitchell as the state’s first state park, ensuring Mitchell’s legacy will be remembered in perpetuity.